500 years ago planet Equilibria exploded and created a whole new world-system consisting of thousands of planet fragments connected and influenced by energy. That´s where our story begins… 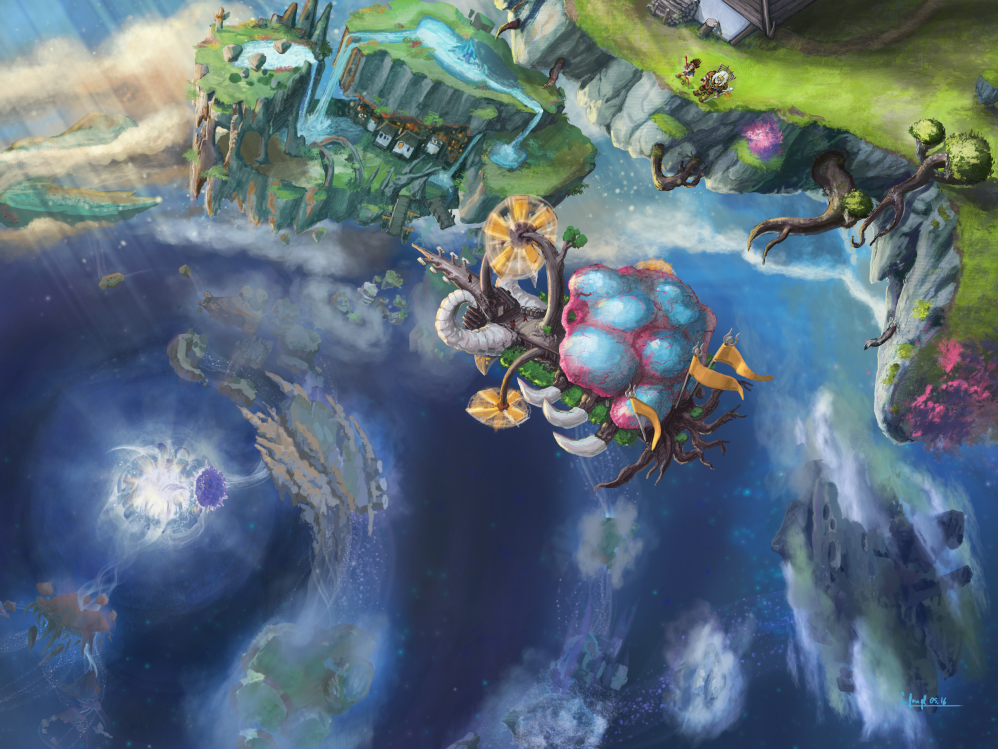 After the explosion of Equilibria, the planet itself revealed a strong energy core. Time after time the planet fragments composed themselves to five little systems which all are held together and are connected in a tree structure by the core energy. Due to a tragic event, one system died away. The four remaining systems are called districts which are reigned by the government fragment which rotates close around the core. Due to the strategic position the government is able to regulate the energy flow from the core to the single fragments. The major of every fragment can distribute the energy according to the plans of the district government. Besides the energy itself, another important element, created by the explosion, are the energy crystals. They are used as a storage or tool to make the energy for Equilibria´s citizens usable. But not only the planet itself was directly influenced by the energy – even animals that had been living next to the energy streams had been absorbing the energy and changing their look and behaviour. After a few decades, a small number of people were born who were able to communicate or even interact via the energy. They are called the energy whisperers. 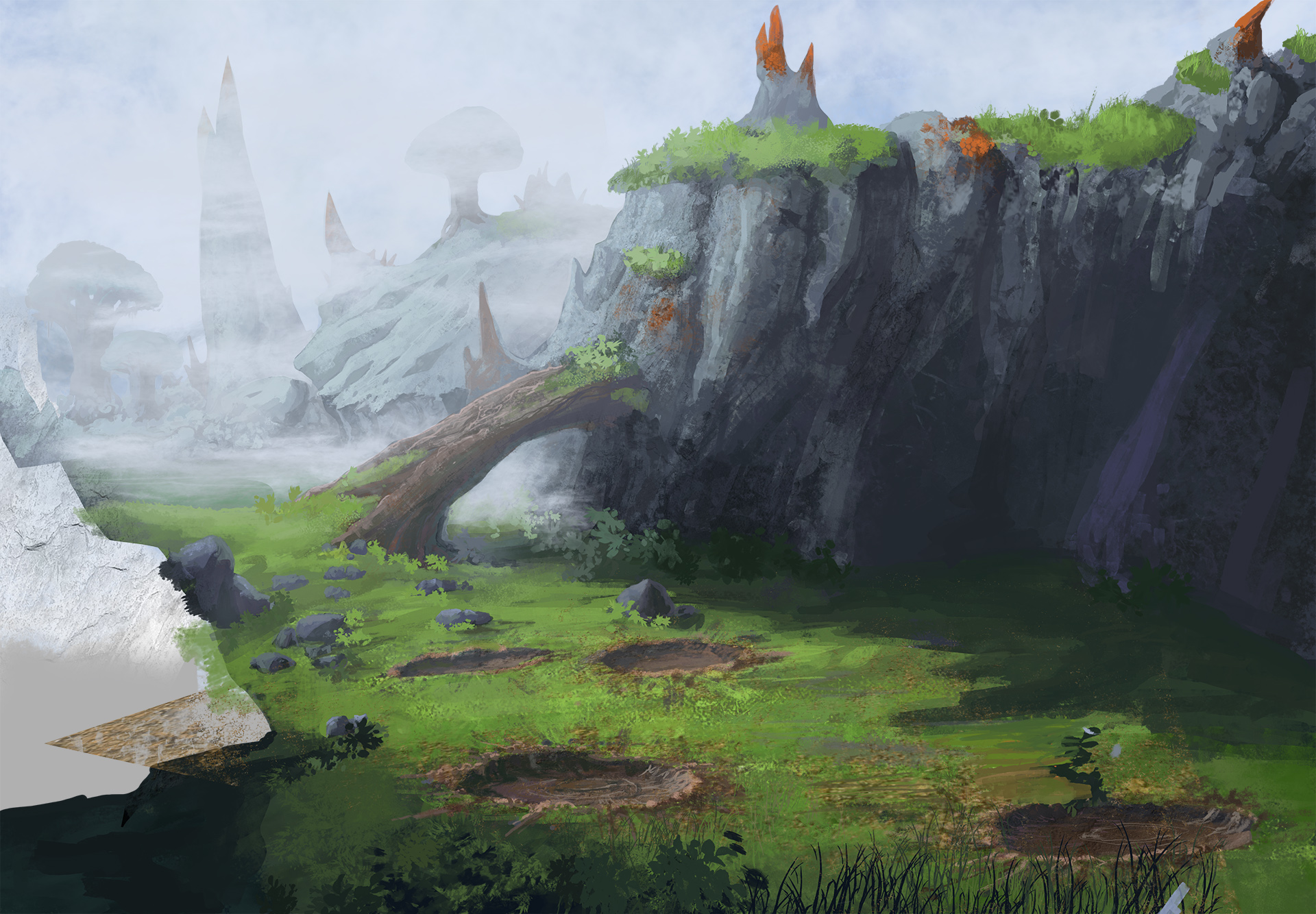 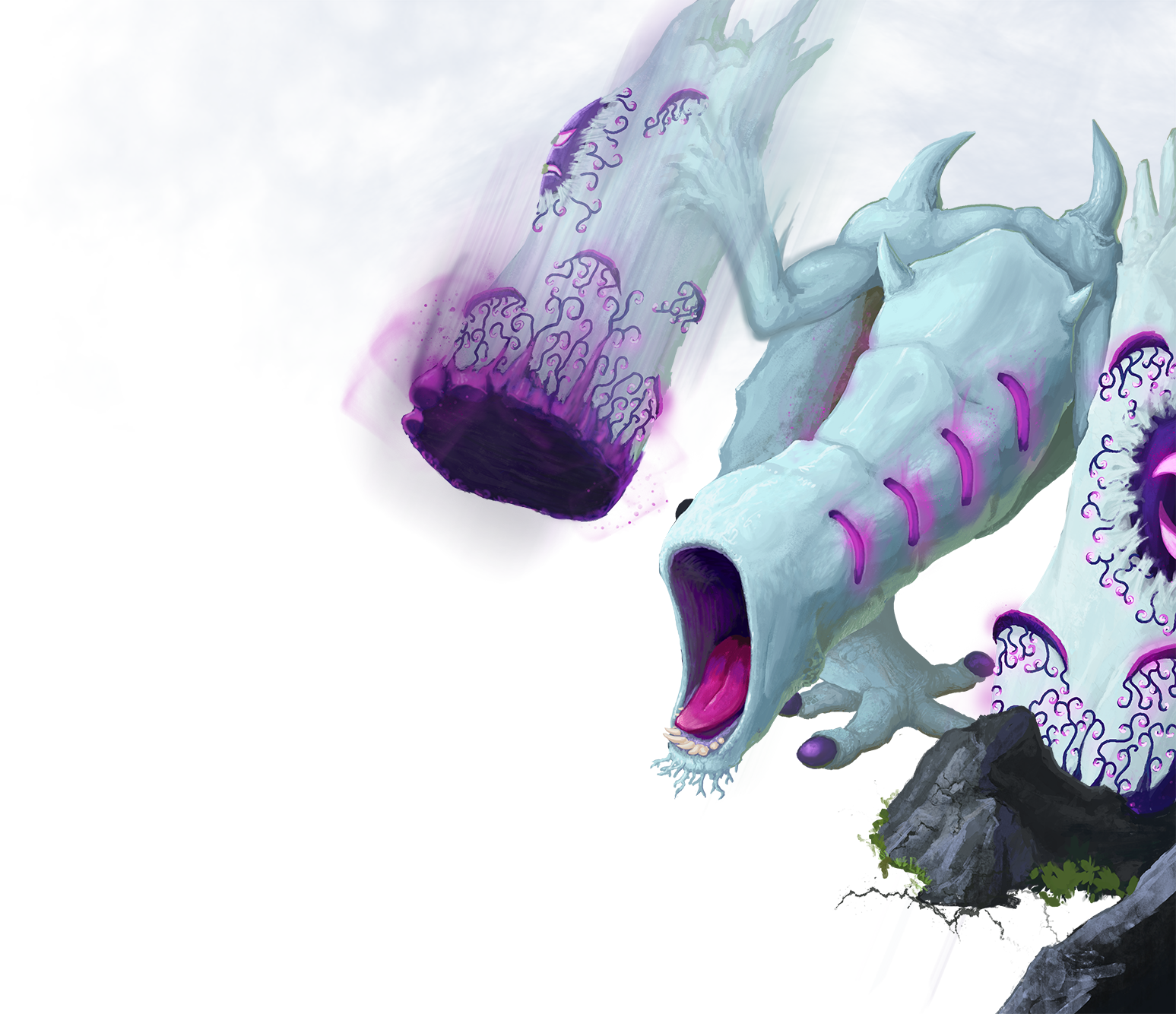 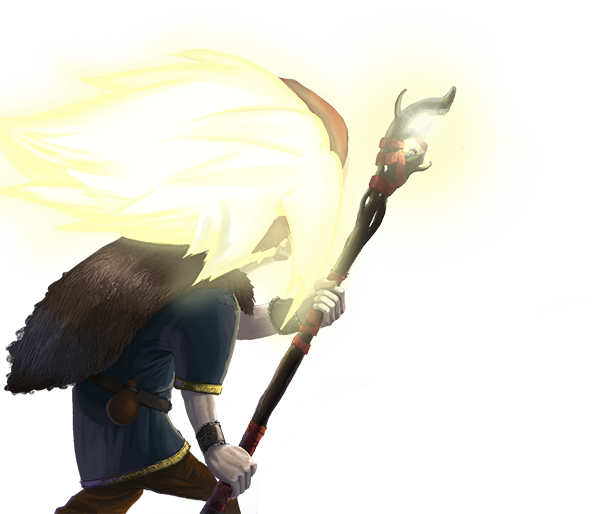 The story is about a little boy called Law, born in the green district. His father
is an important officer in the government army and his mother a citizen of
the green district. Once the father obtains a mighty light-energy crystal
and the government gets wind of the sceptical attitude he has about
the regime, he is seen as a risk for the government and has to flee as
a wanted man. During his getaway, his wife dies but he could save Law
and bring him to a more humble planet fragment called Orodir. On Orodir
the mayor, who is a good friend of Law´s father, cares for him. On this
planet fragment Law meets Asa who becomes his best friend. One
day Law hears a mysterious whisper and he notices some
lights and decides to follow them...

Crystals are segmented in different powers: for example air, water and fire, but also more specific ones like gravity. Crystals can only be used with a so called filter, that defines the shape of the emitted energy (e.g. a filter for a fire crystal could create a candle flame, while another one creates a flash) and therefore its application area. Much rarer than the common energy crystals are the energy artefacts. These special crystals can only be used by a living organism who assimilates the energy artefact. They don´t require a filter and its owner can learn how to apply and emit the energy through the pores of the skin in any possible form. There exists only one energy artefact of the same power. 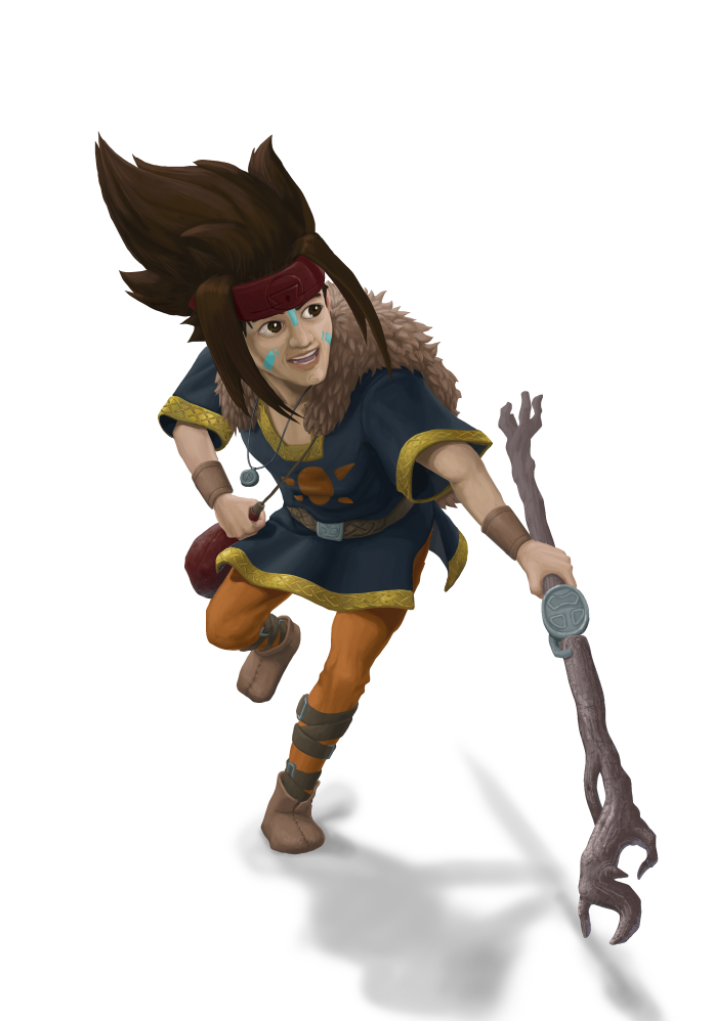 Law is a curious and at first a bit naive boy born in the green district and now living in Orodir. He doesn´t really know his parents because his mother died early and his father is on the run from the government. He is in the custody of the mayor of Orodir who he sees as his grandfather. He also lives at the mayor´s house. He admires his best friend Asa for being so independent and confident. Law is very openminded and likes to exchange views with other citizens of Orodir. In his free time he likes to play with Asa and discover the whole island fragment.
This may sound like a normal kid´s life, but it will take a tragic turn... 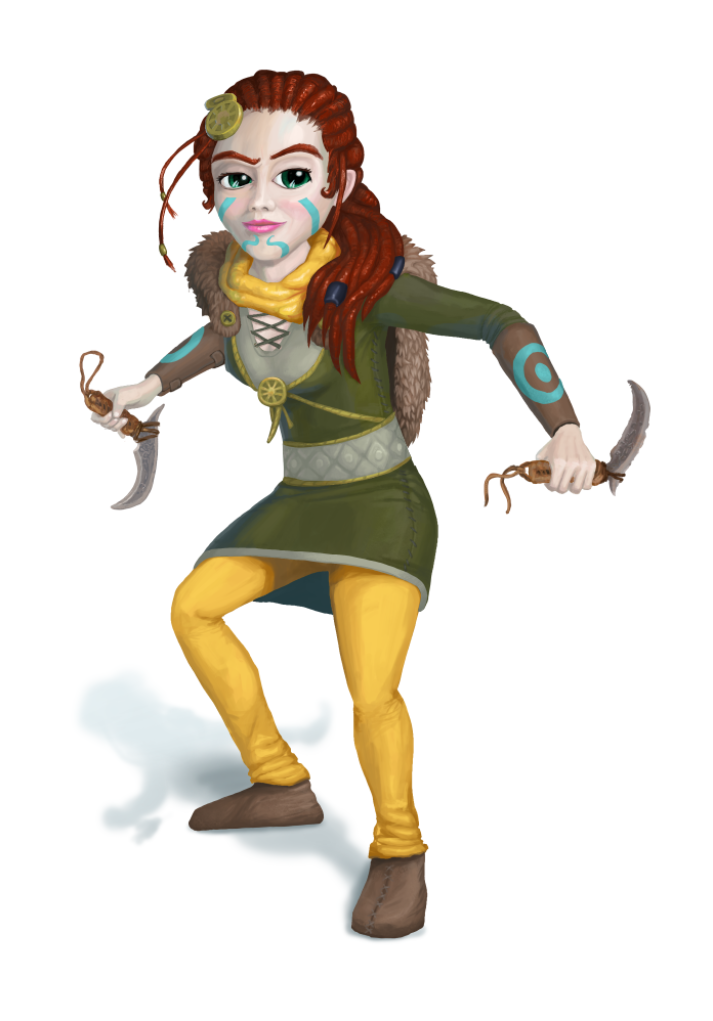 Looking at her ambiguous smile it already tells a lot about her impulsive and confident temper. Like Law, Asa has been living on another island fragment before coming to Orodir. Since her parents died in an accident, which changed her personality quite significantly, she´s as well in care of the mayor. But in contrast to Law, she lives alone in her own house. On the one hand she likes to help Law, who is a few years younger, in getting independent and self-confident and teaching him how to defend himself. But on the other hand she also likes to play with him and discover new places around the planet fragment. Sometimes she just wants to talk with him because of their similar parental situation. 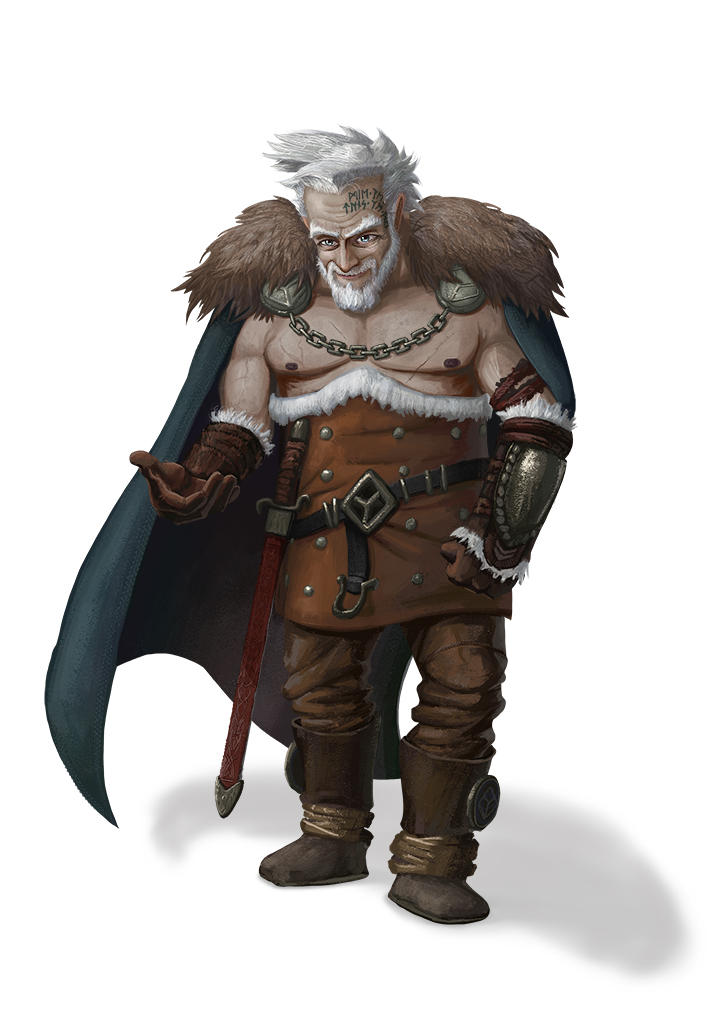 The 65 years old mayor of Orodir is a very fair and wise person. He cares for Law and protects him from harassments of other citizens because of his father´s background story. As a former important member of the government´s army he has many good relations to people from other planet fragments from which he profits in his job as mayor. He always tries to keep up-to-date on the happenings around the planet. As a good friend and army colleague of Law´s father, he promised him to take care of his son. He has a critical attitude towards the government. 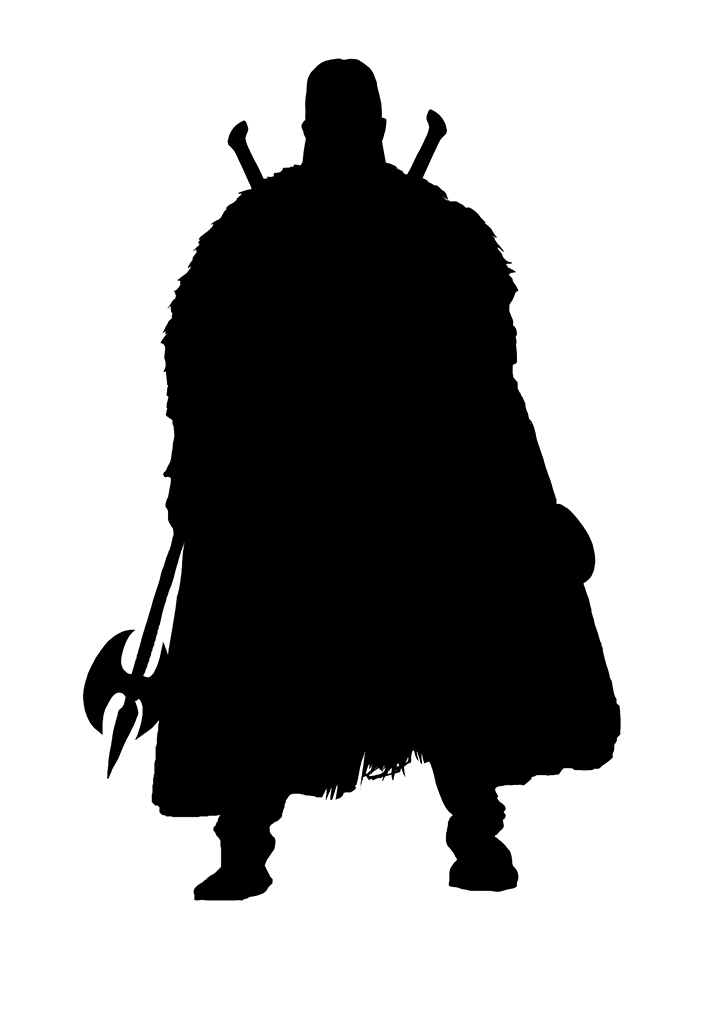 There is not much known about Law´s father. He was a former officer in the government army until they saw him as a threat because of his crucial dissensions with the regime and the fact that he is in possession of a powerful energy artefact. Since he is a wanted man he is on the run. Rumour has it that he has a special connection to the core energy.

The planet fragments that were formed by the explosion of the planet are within the gravitation field of the energy core which represents the former heart of the whole planet. The fragments are all connected by energy streams and they are influenced by the gravity towards the core. Because every fragment has its own resources and atmospheric conditions, in most cases there are special crystals needed to make the planet fragments habitable. The distance to the core is also important for the amount of energy the fragment receives. Generally, fragments with a high industrial or economic potential are situated closer to the core and obtain more energy than the agricultural fragments receive. The single fragments are arranged in 4 groups which represent the districts. 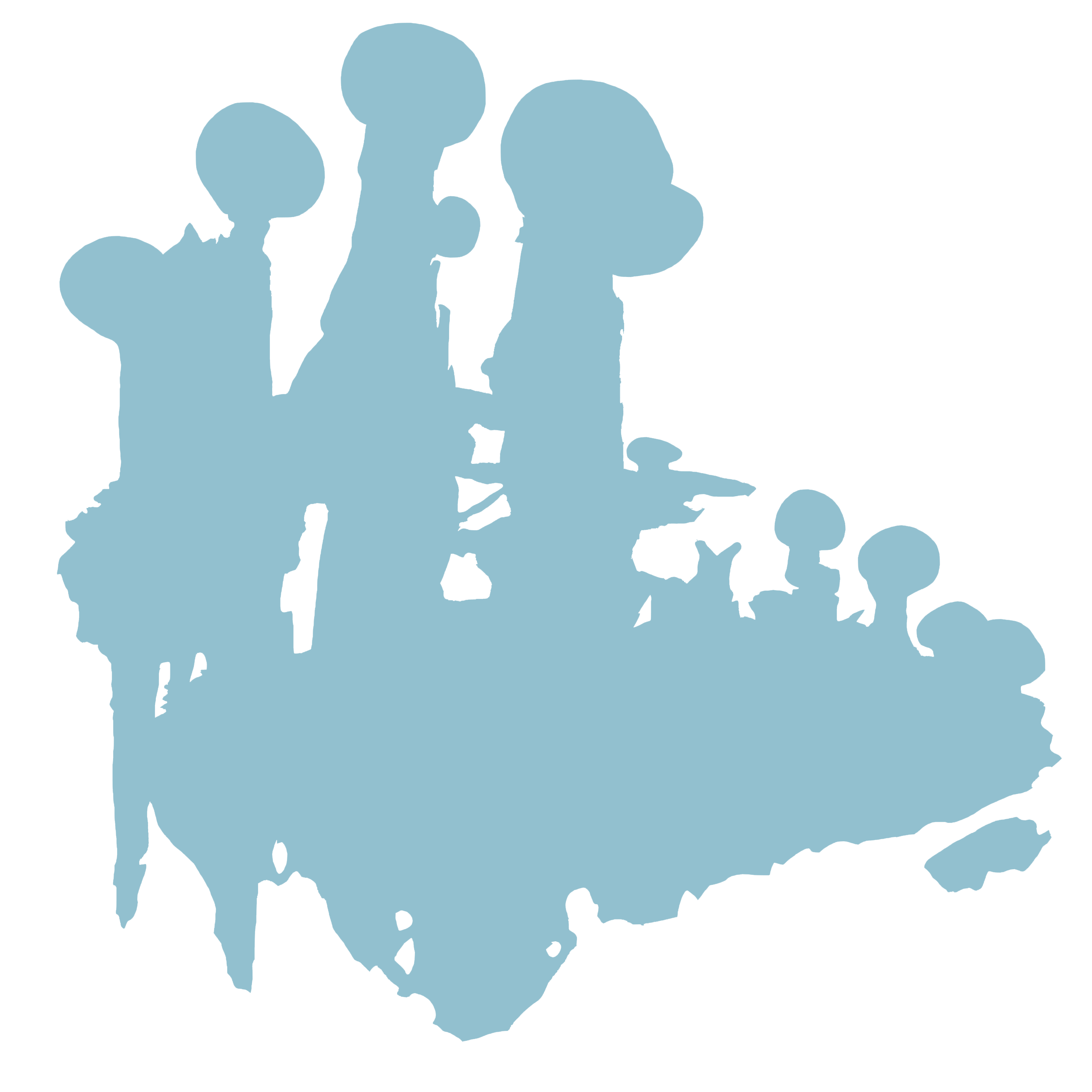 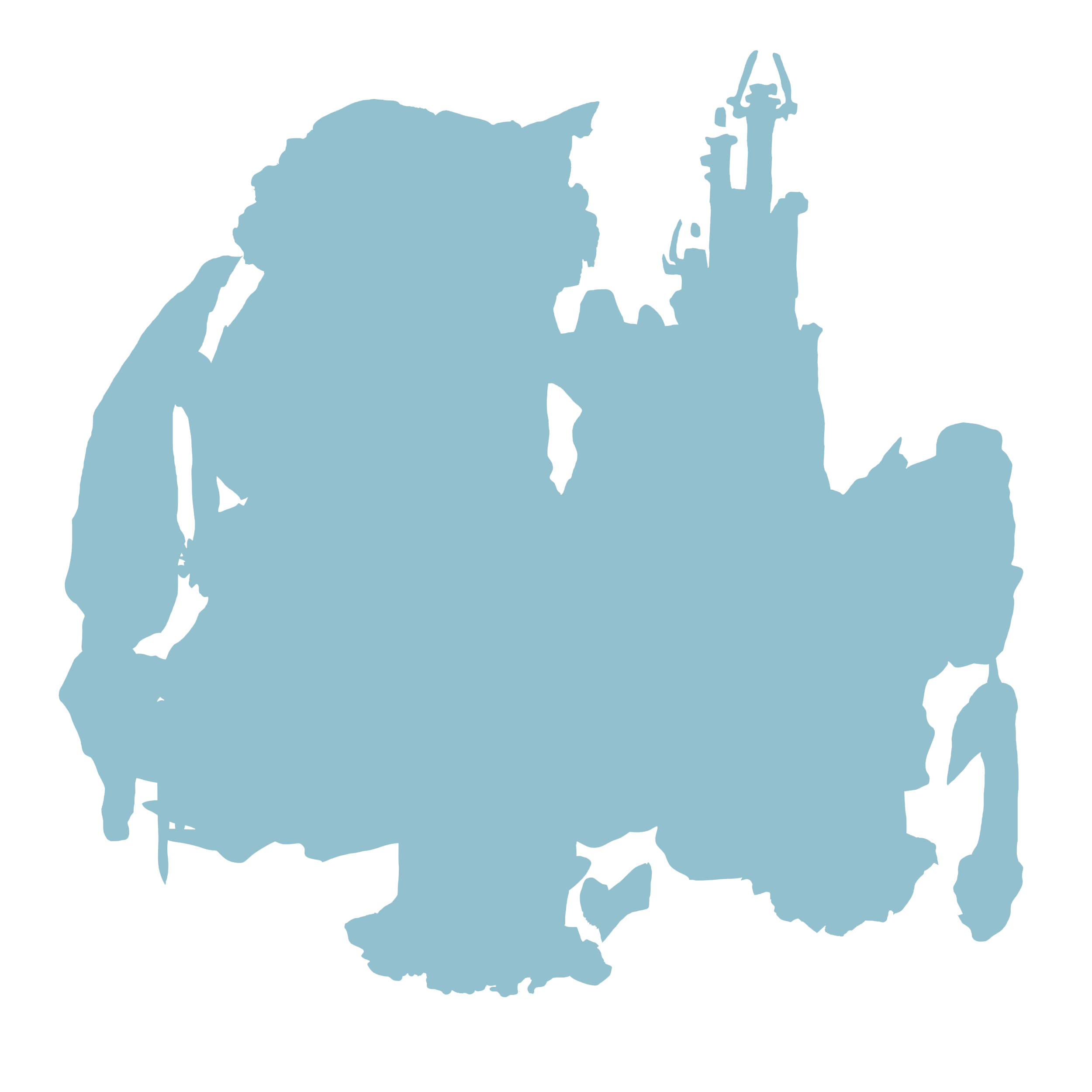 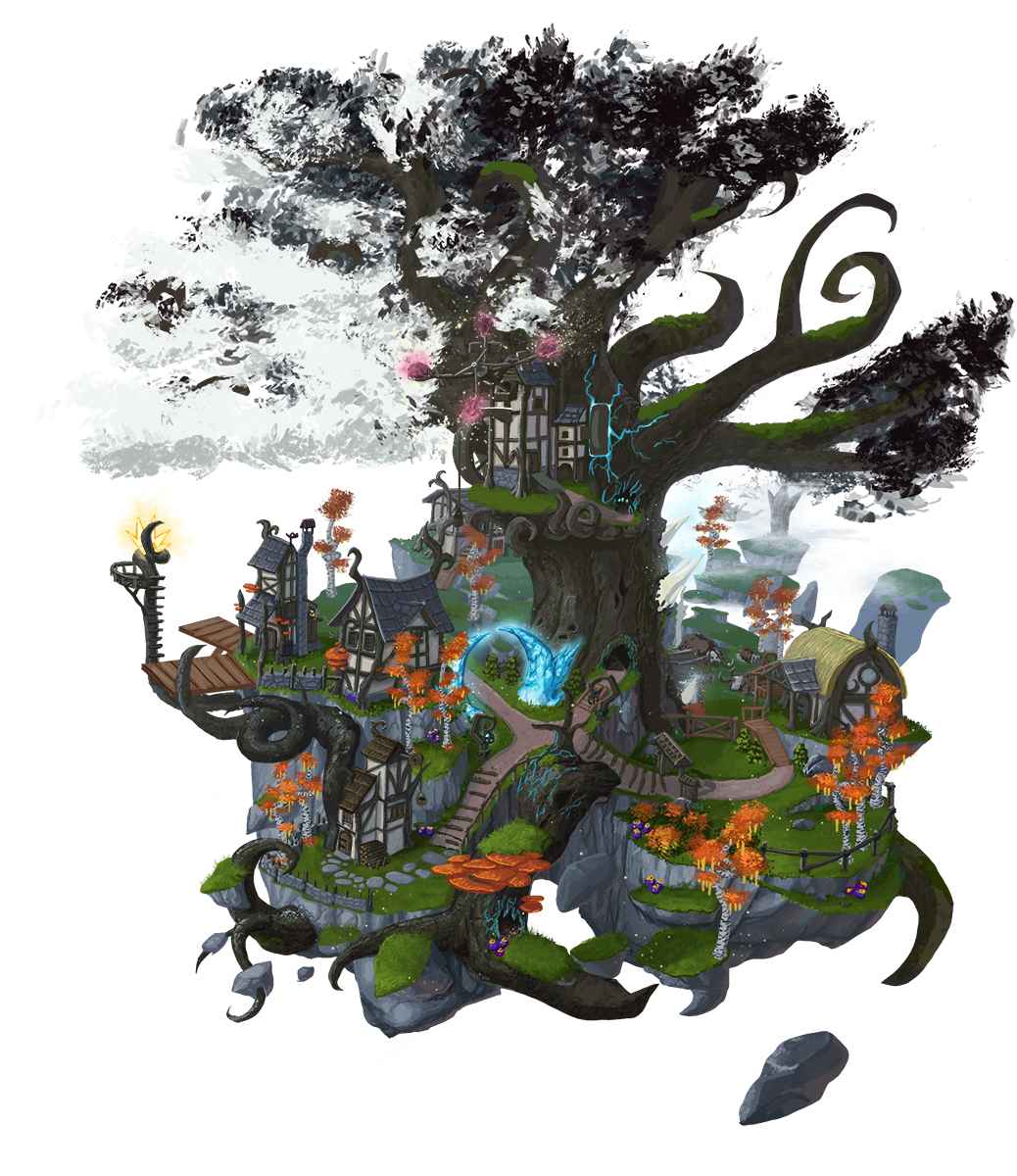 Orodir is a rather humble island fragment
with a cold and cloudy weather. Most of
the time it is covered in a gloomy, rainy
or foggy atmosphere. The buildings
are mainly made of wood, stone and
clay. Its vegetation consists of colourful
woodland plants such as mushrooms or
little flowers and a huge broadleaf
whose roots sprawl around the whole
fragment. The roots of the tree, which
is in danger of decaying, are crucial to
hold the planet fragment together. 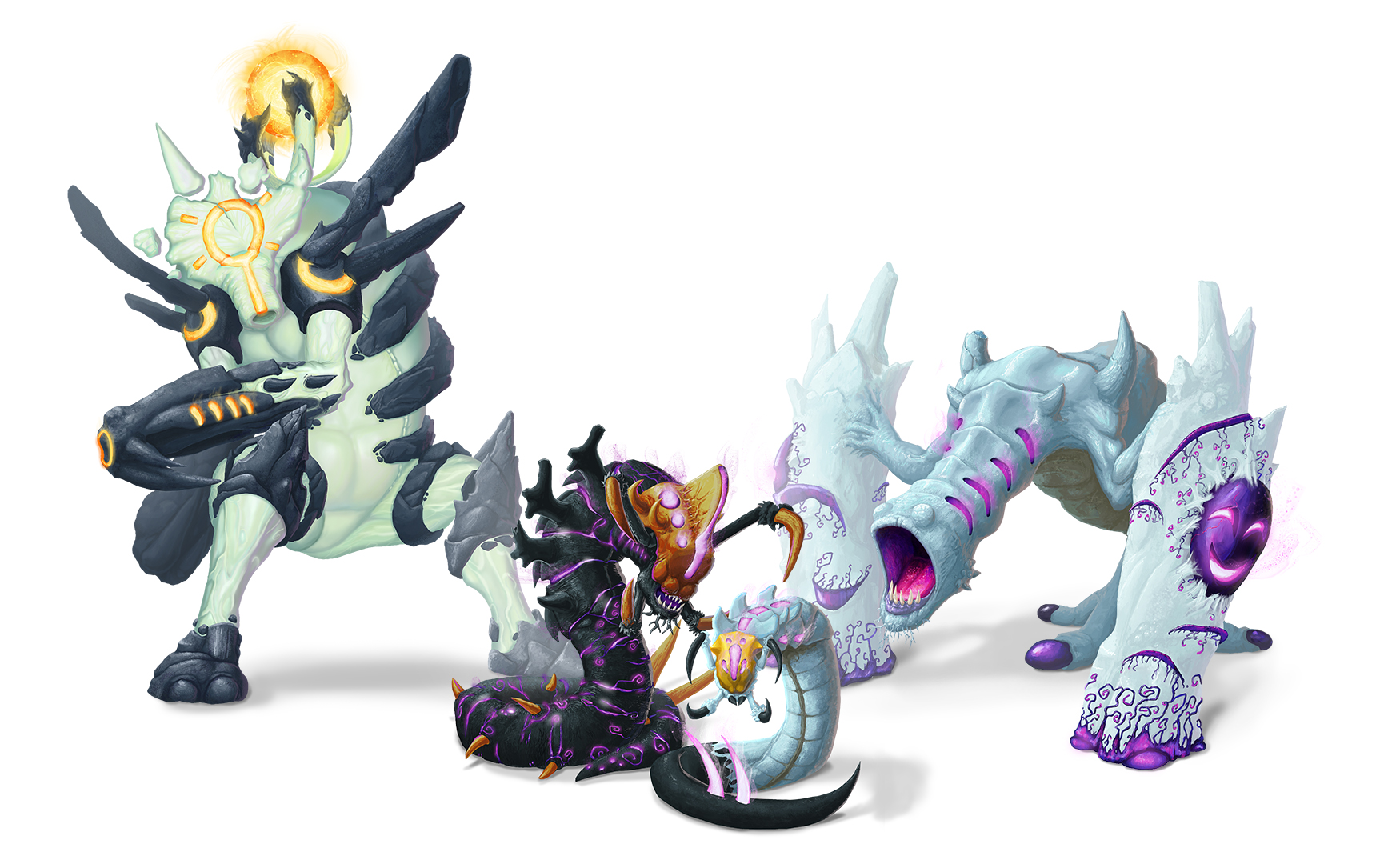 You can find common animals all around Equilibria. Usually these animals have a very pale skin or fur texture. They are traversed by delicate purple veins due to the symbiotic life with the core energy. After a time they developed a very sensitive intuition for the energy and were able to orient themselves and hunt with it.

Those creatures are composed of pure energy. Their existence is not really proven but it´s said that they live in a parallel universe and they can perform energy attacks on their opponent. The only way to beat them is to destroy their energy source and assimilate it.

Recently badly mutated versions of common animals were sighted. They have strange adenoids on their body and in most cases are much larger than the initial animal. It seems that their skin is torn open and the energy is shining through these cracks. They also appear darker than normal animals. Their origin is unclear and their number is constantly rising. 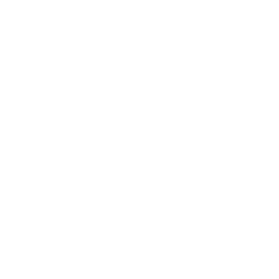